skip to main | skip to sidebar

On April 2, 2021 I received this card from the Baseball Card Bandit (BCB): 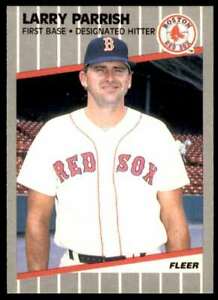 Larry Parrish was one of those guys. You know what I mean, he was the type of guy that was seemingly in every baseball card pack you opened. You looked at the front of his card for a minute, maybe you looked at the back of his card for a half-second and then you shove it back into the pile and keep flipping cards to see whether you got a Wally Joyner or a Bo Jackson or a Roger Clemens.

Unless you were a die-hard Expos or Rangers fan*, chances are you don’t remember Parrish all that much. But he was a beefy dude who played fourteen and a half seasons for Montreal and Texas. When I got around to noticing who he was, he looked like a stereotypical designated hitter; giant, slow, with a bit of a belly. Kind of like a softball player, a person who was seemingly born to DH, but at one point in his life, he had the mobility to be a third baseman and outfielder.

Life is a lot like that, you run into people at certain points in their lives and you think that’s who they’ve always been, but that’s not true. That Mom who’s always making stuff for the school bake sale? She was the bassist in a pretty decent riot grrrl band back in the 90s. The Dad who coaches your kid’s Little League team? He got black out drunk every weekend in college. You’re the guest star in their story, not that other way around. And that’s how it was for me and Larry Parrish. When he played in Boston he looked like a jacked up Alex P. Keaton; neat, short-haired almost like a Republican. But when he was in Montreal, he looked like Bill Lee's running mate, Grizzly Adams-type with a crazy beard and wild eyes. Beards were scary to me in the 1980s, Jeff Reardon (another former Expo to play for the Sox haunted my nightmares). Compare Parrish's card above to an early 80s card while an Expo below. 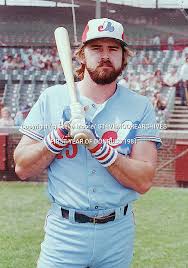 * As a Massachusetts native, I can’t think of no two more seemingly different, but very similar, outposts in Major League Baseball than Arlington, Texas and Montreal. Both teams were very anonymous, but on the fringes of being pretty good—Montreal was really good but they couldn’t put it together. They both wore powder blue away uniforms and crappy stadiums. Both had terrible weather (too cold in Canada, too hot in Texas) and they just seemed like teams that were around to fill out the league so that the Dodgers didn’t have to play the Cardinals every weekend and the Yankees didn’t have to play the Red Sox all the time--yet they were never on TV's Game of the Week.

Did you know that Parrish was a two-time All-Star? It’s true, in 1979 and 1987 he made the mid-summer’s classic. The year after he made his second All-Star Game he was released by the Rangers in July and picked up by the Boston Red Sox about a week later. This was around the same time that John McNamara got canned and interim manager Joe Morgan was expected to keep the manager’s office warm until Lou Gorman could find a replacement skipper.

But Morgan kept winning and winning and winning that month, the Red Sox went on a tear and Morgan Magic was born. I remember when the Sox got Parrish he came to town, put on Don Baylor’s old number 25 (which seemed right, he reminded me a lot of a white Don Baylor), stood erect at the plate (he looked like he was seven feet tall and 250 pounds) and just started mashing.

In all, he hit seven home runs for the Sox that season and I bet six of them came within two weeks of his signing. After being discarded by the Rangers, all of a sudden he was as hot as the team he joined. You could tell that the Sox had captured the sports zeitgeist because in September, they made the cover of Sports Illustrated and one of the photos was an action shot of the newly acquired Parrish taking a hellacious cut and destroying a ball.

As the team lost their otherworldly momentum, so did Parrish. He finished a shade under .260, with seven homers, a .298 OBP (yuck) and a .424 slugging percentage. That wasn’t too bad for a 35-year-old, but I think that everyone knew that Larry was done. The good news was 1988 was Parrish’s second foray into the postseason (he was a member of the Blue Monday Expos in 1981), but the Sox were quickly run over by the Oakland A’s juggernaut and Parrish retired from the game after that season.

After he retired, he got back into baseball and was a coach for a few teams. Much like his last skipper, Parrish was named interim manager after his old Ranger pal Buddy Bell got the hook and rode a decent September 1998 (13-12, which was part of their overall 65-97 record) into becoming the new Tigers skipper the following year. The team was abysmal in the year of our Prince, 1999, and finished the season with a slightly better 69-92 record. But it wasn’t enough for the Tiger front office and he was not asked back to manage Detroit into the new Willenium.

As one of those guys, you don’t think of a Larry Parrish very much unless he somehow finds his way to your team. Then you think about him a lot. You can’t remember what life was like when Larry Parrish wasn’t holding down the DH position for the local nine. You see that weird stance every night, you open up Sports Illustrated and there he is the crisp, bright white Red Sox uniforms and you’re like “Damn, Larry Parrish was made to be a Boston Red Sock.”* You get all caught up in his hot streak and the team’s scorching three weeks and start believing that maybe Larry Parrish was the x-factor, the guy who the team needed to push them over the top. This is the year that the Red Sox are going to finally get that stupid monkey off their back. 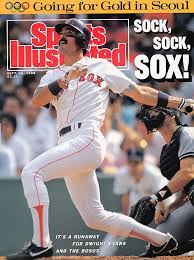 * I was so all-in on Larry Parrish that I bought his rookie card that summer.

But, as they say, water finds its level and Parrish turned back into an old pumpkin. However, you still hold out hope that maybe at the end of September and into October, he has just a little more gas in the tank. Maybe he can put the team on his back and carry them for just a few more games—14 at the absolute most.

He doesn’t. Everyone knows that he’s cooked and he’s gone at the end of the year without much fanfare. After a bunch of years, you almost forget that Larry Parrish ever had a locker in the home clubhouse at Fenway Park, unless you’re tipping back beers with friends and talking about obscure Sox guys.

“How about Larry Parrish!”

“I don’t mean the Tigers catcher, I said LARRY Parrish!”

“Oh shit, yeah I remember him. He was pretty good for awhile back in 88, right?”

As a guy, it’s always good to be remembered for doing some stuff.